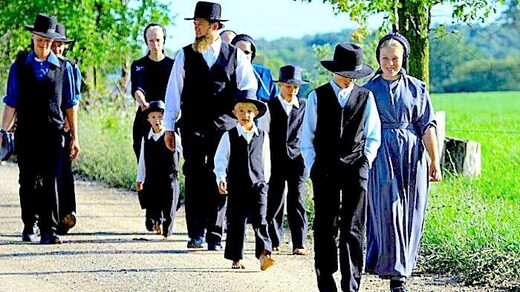 When it comes to actions taken to address the Covid-19 threat, hindsight is still very much underway. For your consideration: a story and outcome you probably aren't hearing much about anywhere else. It takes place in the heart of Amish country.

The Amish are a Christian group that emphasizes the virtuous over the superficial. They don't usually drive, use electricity, or have TVs. And during the Covid-19 outbreak, they became subjects in a massive social and medical experiment.

Sharyl: So, it's safe to say there was a whole different approach here in this community when coronavirus broke out than many other places?

After a short shutdown last year, the Amish chose a unique path that led to Covid-19 tearing through at warp speed. It began with an important religious holiday in May.

Lapp says they weren't denying coronavirus, they were facing it head on.

Lapp: It's a worse thing to quit working than dying. Working is more important than dying. But to shut down and say that we can't go to church, we can't get together with family, we can't see our old people in the hospital, we got to quit working? It's going completely against everything that we believe. You're changing our culture completely to try to act like they wanted us to act the last year, and we're not going to do it.

Steve Nolt is a scholar on Amish and Mennonite culture, and Mennonite himself. He's studying Amish news publications to analyze community-wide trends.

Sharyl: So, are you saying, as of about May of 2020, things kind of went back to normal in the Amish community?

Steve Nolt: For the most part, yeah, by the middle of May, it's sort of like back to a typical behavior again.

Nolt: I know of some cases in which Amish people refused to go to the hospital, even when they were very sick because if they went there, they wouldn't be able to have visitors. And it was more important to be sick, even very sick at home and have the ability to have some people around you than to go to the hospital and be isolated.

Then, last March, remarkable news. The Lancaster County Amish were reported to be the first community to achieve "herd immunity," meaning a large part of a population had been infected with Covid-19 and became immune.

Some outsiders are skeptical, and solid proof is hard to come by.

Nolt: Even those who believed that they had Covid tended not to get tested. Their approach tended to be, "I'm sick. I know I'm sick. I don't have to have someone else telling me I'm sick." Or a concern that if they got a positive test, they would then be asked to really dramatically limit what they were doing in a way that might be uncomfortable for them. So, we don't have that testing number.

Lapp: We didn't want the numbers to go up, because then they would shut things more. What's the advantage of getting a test?

One thing's clear: there's no evidence of any more deaths among the Amish than in places that shut down tight — some claim there were fewer here. That's without masking, staying at home, or another important measure.

Sharyl: Did most of the community, at least the adults, get the Covid-19 vaccine?

Nolt: Again, we don't have data on that, but I think it's pretty clear that in percentage terms, relatively few did.

Lapp: Oh, we're glad all the English people got their Covid vaccines. That's great. Because now we don't have to wear a mask, we can do what we want. So good for you. Thank you. We appreciate it. Us? No, we're not getting vaccines. Of course not. We all got the Covid, so why would you get a vaccine?

By staying open, the Amish here have one tangible 2020 accomplishment few others can claim.

Lapp: We have this joke: when everybody else started walking, we started running. We made more money in the last year than we ever did. It was our best year ever.

Did the Amish really find a magic formula? They say yes. And they don't care who doubts it.

...and this from Sharyl Attkisson:

Another fake fact check from Facebook's "Science Feedback": this one about Amish Covid-19 immunity​

The following is a news analysis.

If you've paid attention, you already know that Facebook's "Science Feedback" and other health-related fact checkers are prolific distributors of misinformation and false information that typically benefits the vaccine or pharmaceutical industry.
They tend to "fact check" articles about medical studies and topics that are having an impact on the public, in hopes of tamping down the buzz and circulation of the data or details.

This week, these players are working hard to keep the public from learning that the Amish have claimed to reach "herd immunity" with Covid-19 and fared better than places that imposed drastic measures. The Amish say they did so without masking, closing, social distancing, or vaccination.

The Amish claim of herd immunity was previously reported by Associated Press and other news organizations, but didn't get wide circulation. The propagandists and fake fact checkers didn't challenge the topic at the time.

But my report on the same, which aired last Sunday on Full Measure, must be having an impact.

In response, Facebook's Health Feedback propagandists have made several false and unsupported claims in an attempt to discredit The Amish approach and the reporting about it.

The fake fact-checkers falsely claim that "natural immunity post-infection is variable, while vaccination provides safer and more reliable immunity." The bulk of the scientific studies show the opposite. (You can find them here and decide for yourself.)

Additionally, they misleadingly imply that those who have had Covid-19 have even better protection if they go ahead and get vaccinated, anyway. (Refer to the same study list for the actual scientific findings to date.)

The Centers for Disease Control (CDC) got caught making the same false claim, that Moderna and Pfizer studies showed people who have had Covid still are benefitted from getting vaccinated anyway, earlier this year. The studies did not show that.

Additionally Science magazine repeated the same false claim in an article that later had to be corrected. (See Media Mistake #23 here.)

Facebook's fake health fact-checkers repeating this same false information indicates they are in line with the interests putting out the disinformation through the government and scientific sources.

Facebook's fake health fact-checkers previously were exposed in an embarrassing episode when they falsely claimed the Covid-19 lab theory had been debunked and that an Epoch Times documentary was untrue.

As always, when these special interests want to keep you from learning information, as if you cannot decide on your own what to think, it is a cue that should point you to seek more information about what they're trying to hide. Ask yourself: Who wants to prevent me from seeing or believing this information -- and why?

It may seem like a long time ago, but it actually was just about five years ago when third parties did not so overtly and commonly interfere with our access to information. We were, by and large, allowed to access what we wished and draw our own conclusions. Yes, there was manipulation, as I've written about in my books, but it was still possible for informed consumers of information to access a wide variety of facts, studies, news, and views. The concept of inviting or allowing a third party to insert itself between us and our pursuit of information is a relatively new concept. However, the practice has now become so ubiquitous, it's easy to forget how things had been. The resulting cottage industry has corporate and political interests, through foundations, nonprofits and other pass-throughs, funding and influencing the "fact checks" and other propaganda techniques-- making it harder and harder to get independent information.
Reactions: The Spin Meister and jjw165

The Amish don't have elections to rig and liberties to steal.
H

lknwake said:
Looks like they have much more liberty than you and me. They definitely have more common sense.
Click to expand...

More liberties, LOL, ask the young teens and adults what they think about the "more liberties"
You must log in or register to reply here.

Was the 'red wave' destroyed because of Covid?