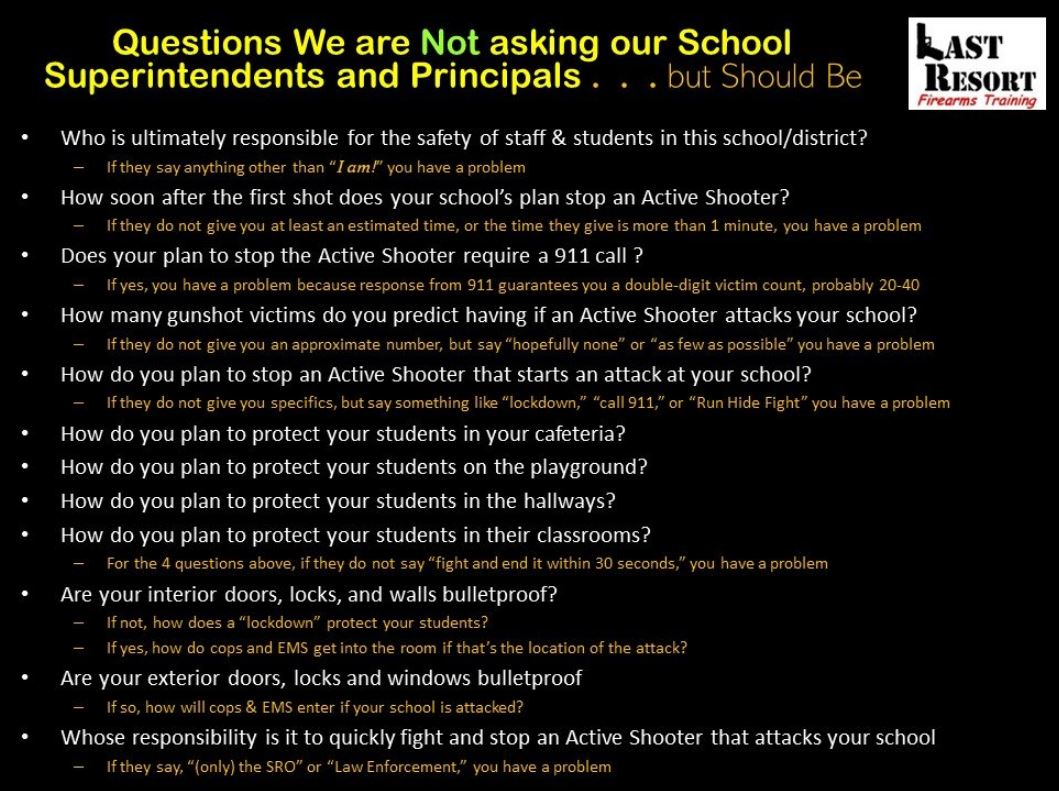 Questions from Ed Monk. Few of us study violence. If we look at how violence works, one of the first things we notice is that our usual rules don’t apply. We notice that violent murderers ign…

slowfacts.wordpress.com
Questions from Ed Monk.
Few of us study violence. If we look at how violence works, one of the first things we notice is that our usual rules don’t apply. We notice that violent murderers ignore our laws about violence and guns. These murderers do follow some simple rules as they attack their victims. Ed Monk is an expert on mass public violence and how to stop it. He studied those rules. Anyone who protects our children needs to study those rules as well. I posted Ed’s questions for school administrators. That’s when I noticed that many of us don’t understand the question, let alone the answers. Let me fill in the gaps and give you a brief look at the world of violence. We are talking about life and death so please hold on.

“Who is ultimately responsible for the safety of staff and students in this school or school district?”

Safety isn’t an accident. Protecting the staff and students requires both planning and action. That means it has to be someone’s job. It is their obligation to protect our children. We hold them responsible.

The responsible person also needs the authority to take the actions that ultimately protect the students. That required combination of both obligation and authority means that school safety usually rests with the principal of a school and the superintendent of the district. They may have advisors and aids, but it is their responsibility. If they are doing their job then they know exactly who is responsible.

“How soon after the first shot does your school’s plan stop an active shooter?”

We know a little about armed murderers. We know that they will kill until we stop them. That means time is everything. The sooner we stop them the fewer children will die. Planning for a perfect defense that arrives an hour from now is a dangerous fantasy.

Violence follows a simple calculus. We will add another victim each 10 to 15 seconds during the first minute. More people will be shot if the defender is at the other end of campus rather than being in the classroom across the hall from the attack. Having more defenders simply means the nearest defender will engage the attacker sooner.

A defender should be close enough to the victims so he can hear and respond to the first shots in seconds. The school principal or district superintendent doesn’t really have a plan unless they’ve added up the seconds. A real answer has a range of times, from 30 seconds to 50 seconds depending on the location of the attack.

“Does your plan to stop the active shooter require a 911 call?”

The police will arrive in minutes after they are called. Once they arrive, the police are under no legal obligation to enter the school and defend the children. That is more than a legal opinion since we’ve seen the police wait outside the school while children were murdered. Even if the police go into the school to save the children, there will be a large number of dead children and teachers because the murderer had so much time while we waited for the police.

The school official is making a very clear statement if he has outsourced the school’s defense to the police. He is saying that he’d rather lose 20 to 40 students and staff to the murderer than have armed staff on campus. If that plan works for him then he should be out of a job.

“How may gunshot victims do you predict having if an active shooter attacks your school.”

Details matter. Are the office and classroom doors locked as a matter of policy? How did the campus score on its last security audit? Does the attacker have to fight his way through the front office to get into the school, or could he walk on campus and walk through an unlocked classroom door? Are defenders close enough to hear the gunshots, or are the defenders depending on a phone call from the victims to the office and then a second call from the office to the armed defenders?

Doing the math is simple. The decisions are hard because they require absolute honesty. The school official is lying if he says that no one will be shot. Realistic answers are two to four victims.

“How do you intend to stop an active shooter that starts an attack on your school?”

School officials give all kinds of answers. Some simply lock the doors and wait for the police. One school district put buckets of rocks in the classrooms and the students were supposed to throw rocks at the murderer. In contrast, other school districts trained volunteer staff for an armed defense and for emergency trauma care.

Press the school official for a sufficiently detailed answer so you can tell if he is depending on students with rocks.

“How do you plan to protect your students in your cafeteria?“

The answers sort themselves into two broad categories. There is an armed defender there to end the threat.. or there isn’t and we expect a lot of children to die. Press the official for detailed answers to see if the school official is again depending on a “bucket of rocks” or a call to 911.

“Are your interior doors, locks, and walls bulletproof?”

A locked door means that the attacker can not enter the room and accurately target his victims. A locked door cannot resist an assault for long, but it can buy time for the defenders to arrive. If the attacker is busy shooting the lock then he is not yet shooting students and staff. An armored lock buys us seconds, not hours.

“Are your exterior doors, locks, and walls bulletproof?”

Sturdy walls are not permanent, but they do buy us time. I was at a training class where someone worried that the defenders could not get into the school. One of the firefighters said, “I have a 20-ton firetruck and I can make a hole through any wall any time I want.” It is better still to have the attacker shot by the defenders long before the firetrucks arrive.

“Whose responsibility is it to quickly fight and stop an active shooter that attacks your school?”

An armed defender needs to be close to students and staff whenever students and staff are on campus. That starts when the first students arrive and ends when the last staff drive away from the parking lot at the end of the day. That includes parent teacher-nights and early morning activities.

Are school resource officers and other armed defenders present at those times? If the armed defender is not on every floor of every wing of every building then more children will die. Who decided that those children were expendable rather than worth defending?

Some of our school staff will run toward the sound of gunfire. They will protect our children or die trying. These defenders deserve our help.. and our thanks. We can train them to save lives if we first ask the right questions.

The original questions were taked from a detailed briefing provided by Ed Monk. You can contact him here => https://www.facebook.com/Last-Resort-Firearms-Training-180316642038491/?ref=page_internal

Ed’s presentation is here. I beg you to watch it. => https://reflexhandgun.com/2022/02/04/a-must-watch-ed-monks-presentation-on-active-killers/

These questions must be understood and addressed . Whining about laws and arguing about AR 15 being mass casualty weapons like a spazzed out autoid might be your thing but it won’t protect any kids.
Reactions: Online Persona
You must log in or register to reply here.

What Happened in Loudoun Schools

Democrats Debate Themselves: Why Do We Suck?