If we ranked the many Republicans who supported, and still support, Donald Trump’s attempted coup d’etat by their level of enthusiasm for sedition, Rep. Louie Gohmert of Texas is probably at the top of the list. In the days leading up to the Jan. 6 insurrection at the Capitol, Gohmert was openly suing then-Vice President Mike Pence in a bizarre attempt to say that, legally, Pence could ignore every single state in the Union’s votes and choose whichever person he wanted to become the next president. True story.

Just a couple of days before a slew of delusional fascists would crash through the Capitol grounds, attack anyone in their way, vandalize the Capitol grounds, and threaten the safety of the entire legislative branch of the government (including Mike Pence), Gohmert was on Newsmax telling audiences not to wait for the series of frivolous Big Lie lawsuits to be thrown out of court, saying: “You gotta go the streets and be as violent as Antifa and BLM.”

And so it is no surprise that one of the most embarrassing humans to ever hold elected office, Louie Gohmert, equates the late civil rights leader and Georgia Rep. John Lewis’s peaceful, nonviolent sit-in protest on the House floor to demand action on gun safety legislation, with… the January 6, insurrection.

I said: Louie Gohmert is comparing Rep. John Lewis’ historic ‘good trouble’ to (it hurts to even type this) the January 6 insurrection.
..........
On Thursday, during a Congressional committee hearing with Attorney General Merrick Garland, Rep. Gohmert took a break from smelling his own farts to imply that Attorney General Garland was an accomplice in a “two-tiered system of justice.” Before you could even come up with a plausible bogus example for Gohmert to vomit into the public sphere, Louie came forward belching this heinous idea:

“On June 22 of 2016, judge, most of the Democrat members of Congress took over the House floor, and, for the first time in American history, members of Congress obstructed official proceedings. Not for four to six hours, but for virtually 26 hours. Not just violating over a dozen House rules, but actually committing the felony that some of the Jan. 6 people are charged with.”
“That was during the Obama administration, nobody’s been charged, and those kinda things—where you let Democrat members of Congress off for the very thing that you’re viciously going after people that were protesting on Jan. 6—gives people the indication that there is a two-tiered justice system here in America.”
Click to expand...

The reality that then-Speaker of the House Paul Ryan—a Republican dirtbag—is the one who didn’t censure Rep. Lewis or any Democratic representatives for the sit-in, wouldn’t ever factor into a GOP lie like this. But more grotesquely, the idea that the two events could be possibly similar in anything other than their location, is offensive.

As the current, democratically elected government, has not let go of the fact that our democracy was very close to being overthrown with the help of people like Louie Gohmert, Rep. Gohmert seems to continue his full-throated support of saying just about anything that might mitigate the hammer of cosmic justice he so clearly deserves from falling squarely on his soggy sponge-filled head. In the past couple of months, Gohmert has continued his white supremacist-based delusion tour, questioning whether or not the FBI planned the Jan. 6 insurrection in some kind of deep state conspiracy to keep Donald Trump from once again being the most unpopular president of the modern era.

Let’s do a quick comparison: 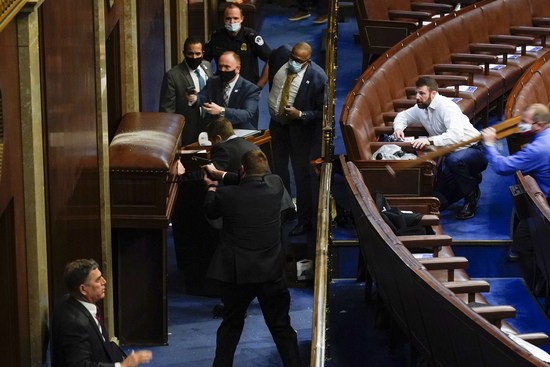 Amping up his ongoing fight with the White House, today Florida Gov. Ron DeSantis, or as the comedy duo Good Liars calls him, “Ron DeathSantis,” called for a special session of the GOP statehouse to block President Joe Biden’s vaccine mandates.

He’s notoriously anti-mandate, anti-lockdown, and just generally anti-anything that could get the dire COVID-19 deaths and hospitalizations down in his state.
Florida on Tuesday reported 2,122 more COVID-19 cases and one death to the Centers for Disease Control and Prevention (CDC), according to Miami Herald calculations of CDC data.
.......
During the governor’s press conference today, DeSantis referred to vaccine mandates as “forced injections” and used the loss of jobs to justify what is more an anti-health stance than an anti-mandate plan.

“We have an opportunity here to take additional action, and I think we have to do it,” DeSantis said, adding: “I think we have got to stand up for people's jobs and their livelihoods.”

No specific date has been given for the session.

"I will continue to oppose that Biden Administration vaccine mandate and am preparing to do so in court as well. Here's why: That approach is wrong. It's not the vaccine. It is the mandate. Companies all across America are figuring that out as we see pilots and flight attendants walk off the job and nurses walk out of hospitals and parents walk their children out of schools,” Lee says.

DeSantis has disregarded state bans on masks in classrooms, and even fined local school boards that impose them.

"He's behaving like the dictators that supposedly we all hate," state Sen. Annette Taddeo told ABC News. “Why are we telling private businesses what they can and cannot do?” This week, Taddeo announced her intention to run for governor.
Reactions: odshowtime

End Book 200
Reactions: tgar
You must log in or register to reply here.