Ukraine update: Events around Bakhmut and Svatove indicate that long-frozen lines are moving​

We’re starting this morning by looking at the two areas where intensive combat operations are underway: In the area around Bakhmut and along the line from Svatove to Kreminna.

For eight months, Russia has been attempting to press toward Bakhmut from every direction. This is the location for which the Wagner mercenary group has made repeat visits to Russian prisons, recruiting people to die fighting to obtain the same blocks over and over. It’s also the location where the gain and losses have been measured in such ridiculously small increments that observers have become intimately familiar with what is on each block. The hardware store. The cement factory. Or, to be more honest, they’ve become familiar with what shows up when you look at the map on Google—because all those businesses are now rubble.

In the effort to take Bakhmut, Russia has sometimes blanketed the streets east of the city with bodies. An October advance that seemed to show Russia finally reaching the outer blocks of Bakhmut proper was followed by a swift pushback from Ukraine that drove Wagner out of the town and back to positions it held in August. Then Russia went right back to attacking again.

However, it’s possible that in the last few days, the static situation may have changed.

Really, the situation at Bakhmut has been so static that many analysts have voiced suspicions that Ukraine wants it this way. Perhaps pinning down Wagner Group in futile efforts to capture this one well-fortified area is designed to simply chew through Russian forces and keep some of their most experienced commanders stuck playing supervisor to increasingly worthless troops hurled through a World War I-style no man’s land to their inevitable deaths.

Video on Wednesday of Russian forces trying to take a location in Bakhmut with just six troops was labeled as Russia attempting to “storm” the location. Six people is not a storm. It’s barely a sprinkle. If Wagner is trying to simply reduce the population of the Russian prison system, surely there are simpler methods than this. However, over the last two weeks, Russia has reportedly been making advances south of Bakhmut. In the process, Russian forces seem to have finally overrun positions that had held since the siege of the area began. Most importantly, in the last two days, Russian sources have claimed that they have captured all of Kurdyumivka. On Tuesday, those same sources claimed that Russian forces were advancing from that location, threatening the villages of Bila Hora and Dyliivka to the west.

The last official mention from Ukrainian sources indicated that Russia had gained control of portions of both Kurdyumivka and Ozarianivka, but local sources are indicating that on this one occasion, Russia doesn’t appear to be exaggerating its gains. Other sources have indicated Russian forces moving northwest, where they can pressure Ukrainians dug in around Klishchiivka.

Whether this breakthrough will eventually be significant, leading to Ukraine falling back from the line that has held over a period of almost eight months, or whether Ukrainian forces will respond and push back the Russian advance, or whether much of this capture proves to be illusory after all, is unclear. But at the moment, this seems to be the most concerning movement in the Bakhmut area since there has been a Bakhmut area to be concerned about.
........
Meanwhile, up the road, where Ukrainian forces have followed the liberation of Lyman by pressing into Luhansk oblast along a lengthy front, what’s happening remains … muddy. Both figuratively and literally. (For a good look at all the activity in Ukraine, and specifically what is happening on this front, check out this review of the current situation from kos.)

Lyman was liberated in mid-October, and for much of the month that followed, Ukraine made slow but steady progress, moving the line forward, liberating small villages, and positioning themselves near the P66 and P07 highways that converge just west of Svatove. Ukraine is advancing on Svatove again … but where?

But everything has been far from smooth. In early November, Russia launched an offensive at the south end of this area. It never achieved the “Now on to Lyman!” success that Russian sources claimed, but it did put towns like Makiivka and Neveske under heavy artillery fire and slowed Ukraine’s effort to capture towns north of Kreminna.

In the north, Ukrainian forces coming down the highway from Kupyansk ran into Russian forces positioned in wooded areas east of the road. Advancing has required moving past one ambush after another and moving down a road with an exposed flank, making a sustained push difficult. Right now, Ukrainian forces seem to have full control of the village of Novoselivske but haven’t apparently been able to dislodge Russian forces from the neighboring town of Kuzemivka. That has blocked reported plans to move to the east, allowing them to approach Svatove from the north.

Meanwhile, Ukrainian forces pushing directly toward Svatove have run into a very familiar factor that can be either friend or foe, depending on the situation: Mud.

Ukrainian forces approached the small villages of Popivka and Nezhuryne a month ago, but images even then showed tanks simply wallowing into position while non-tracked vehicles were axle-deep in muck. Ukraine apparently captured Popivka, and for several days appeared to have pushed Russian forces back far enough that the little place (“village” is almost overselling it) enjoyed something of a moment’s respite, but then Russia began shelling the location again.

Does Ukraine still hold Popivka? I think so. Have they dislodged Russia from Kuzemivka? Not according to any sources I’ve heard. But according to sources in the area, Ukraine is making advances toward Svatove. And some of those advances may be significant.

Where along the line is this base? It’s been “geo confirmed” to be … along that line between Svatove and Kreminna. At the moment, I know no more than this.

Even though rains have diminished and cold weather is setting in across the region, you can see the condition of the ground in this video. Mud is still the name of the game. Ukraine has the T66 highway under artillery control, and has for weeks, but that doesn’t mean it can drive along that highway, because Russia also has the road under artillery control.

If Ukraine has been able to advance on the earlier gains down at Ploshchanka and gain an actual beachhead (bridgehead? Highwayhead?) by capturing areas on both sides of P66 and securing a clear route to bring their forces off the dirt roads and onto that route, things in Svatove-Kreminna might begin to move more quickly. Otherwise, pray for cold, dry weather.
...........
On Wednesday, I mentioned the school training Ukrainian women to fly drones and the continued reliance on observation drones by both sides in this invasion. On the same day, The Economist ran an article concerning not just drones, but all the other “wonder weapons” that have been touted as game changers in the invasion of Ukraine.

The death of the tank was declared on the basis of snatched video footage. Turkish drones were hailed as unstoppable game-changers. Western anti-tank weapons were thrust into an early starring role. Now, nine months into the war, more considered reflections are emerging. There is much that Western armed forces can learn.
Click to expand...

Those considered opinions are that all of the “hero weapons”—from St. Javelin to HIMARS o’clock—have had less impact on the war than many believe. What stopped that Russian convoy from advancing quickly to capture Kyiv in the opening days of the war? It wasn’t, as many seem to believe, Ukrainian forces launching portable weapons from ambush, or Bayraktars striking the columns as they moved slowly along the road from Belarus.

The decisive factor was more prosaic ... “What blunted the Russians north of Kyiv was two brigades of artillery firing all their barrels every day.”
Click to expand...

This by no means indicates that HIMARS or Javelins or drones of all sizes aren’t having a significant role in the conflict. But it does mean that many of the weapons aren’t working as well as, or in the ways that, many expected when the conflict began. As always, plans are only effective until they meet the enemy, and that’s even more true when it comes to plans that involve largely untested weapons systems.

The biggest role played by Javelins, Bayraktars, and the first arriving HIMARS may have been more psychological than physical—they gave Ukrainian forces hope, and they allowed Ukraine to publicize moments when it was able to punch back against what appeared to be an overwhelming force. That is no small thing. In fact, it may be more important than what actually happened on the ground, especially when it came to securing more Western assistance for Ukraine.

When it comes to drones, the role they are playing is both significant and expanding. But one factor that many are not considering is that, in a sense, every drone in Ukraine is a kamikaze drone, which is a factor that no other military has taken into account when thinking of how drones might be used in future conflicts.

A key lesson from Ukraine is that armies need more drones than they think. Around 90% of all drones used by the Ukrainian armed forces between February and July were destroyed, notes rusi. The average life expectancy of a fixed-wing drone was approximately six flights; that of a simpler quadcopter a paltry three. Such attrition would chew up the fleets of European armies in a matter of days.
Click to expand...

All of this comes from a larger review of Ukrainian military actions that is an absolute treasure trove of analysis concerning the opening months of the war. As soon as I have managed to read that full report, expect a more extensive look at the difference between the war-as-lived and the war-as-PR.
........ 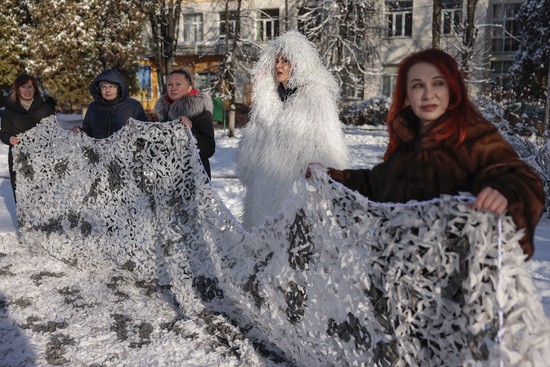 Another image of the winter camo screens being created by the women of Bucha.

UPDATE: Thursday, Dec 1, 2022 · 12:31:30 PM EST · Mark Sumner
Unconfirmed reports that the captured Russian base seen in video above was north of Kreminna near the P66 highway. There are multiple Telegram sources reporting that Ukraine is pressing forward in the area on Thursday, with fighting reported south of the city, as well as to the north near Zhytlivka and Holykove. Some of those reports suggest that Ukraine is moving to surround Kreminna, or at least cut the highway both north and south.

All of this is in the Very Unconfirmed category at the moment. Even the more cautious Telegram channels, such as DeepState, are saying nothing more than that they are “waiting for more information.” 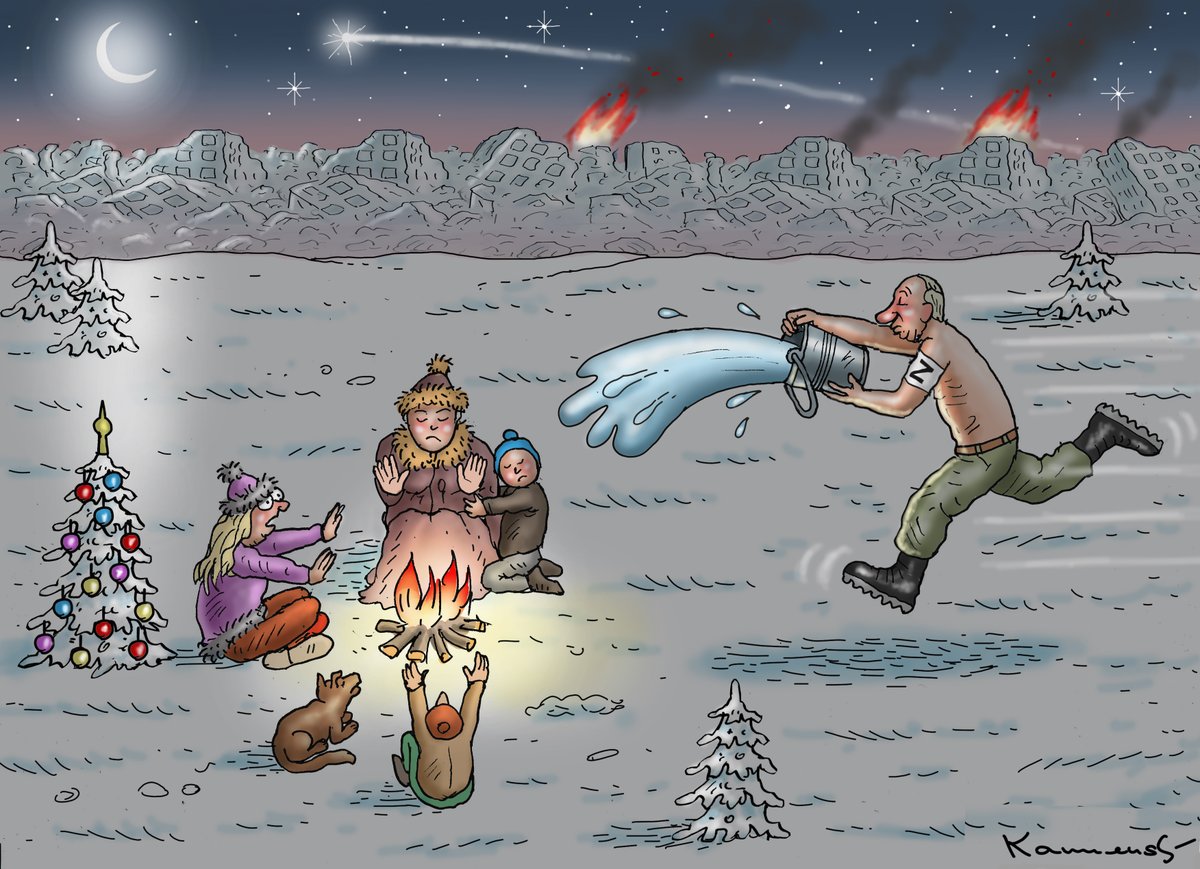 Since preparing for winter was mentioned, the Lithuanians have been very innovative and making stoves for the Ukrainians in trenches out of used car wheels. 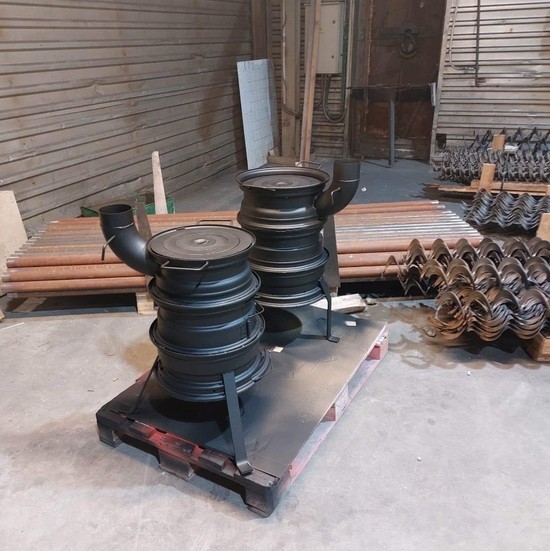 End Book 107
You must log in or register to reply here.

Local news, but so much to love here…

Trump is the one with bank account in China